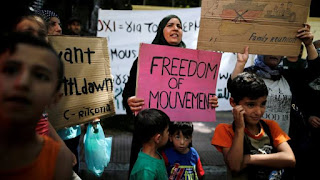 Greece’s prime minister is ready to strike a deal with Angela Merkel to make it easier for Germany to send asylum seekers back to other European countries, giving the embattled chancellor an important boost before a crucial EU summit.

In an interview with the Financial Times, Alexis Tsipras said he was open to a special agreement with Berlin to curtail the “secondary movement” of refugees that arrive at the EU’s southern border but then journey north to Germany.

Ms Merkel is under intense pressure from her Bavarian conservative coalition partners to convince governments to speed up return procedures for asylum seekers already registered in other EU countries. They are threatening to break up the coalition if she fails to get results at the end of this month.

“We don’t care about the fact that maybe we’ll have some returns from Germany if this will help, in order to give the signal to the smugglers [that Europe is tackling illegal migration flows],” said Mr Tsipras. He added the EU’s existing rule book for allocating responsibility for asylum-seekers, known as the Dublin regulation, was “out of life”.