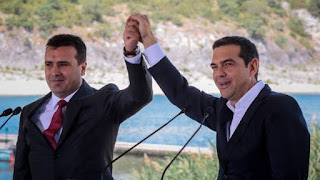 Greece and Macedonia signed a landmark agreement modifying the name of Macedonia, as police used tear gas to disperse hundreds of nationalist protesters gathered on the Greek side.

Speaking on Sunday during a ceremony at the border between the countries, Alexis Tsipras, Greek prime minister, said the two nations had achieved “ a historic agreement . . . to lay the foundations of a new epoch in the region.”

Zoran Zaev, prime minister of the newly named North Macedonia, said: “We have put an end to longstanding problems that worsened our relations. The past 30 years have taught us important lessons . . . and now that we are building a friendship between our two countries, we will become allies and partners.”

Mr Tsipras, however, warned that the two countries “would face a challenge to complete the deal” in a reference to a forthcoming referendum in Macedonia to approve the new name, and constitutional changes for which Mr Zaev’s coalition government currently lacks a majority.