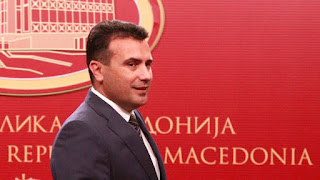 Greece has agreed to recognise its northern neighbour under a new name, the Republic of North Macedonia, ending a long-running dispute over rival claims to the name Macedonia that has fostered nationalist feeling and undermined political stability in the region.

The two prime ministers, Alexis Tsipras and Zoran Zaev, sealed the agreement in an hour-long telephone call on Tuesday, their second in two days.

The name deal is expected to accelerate North Macedonia’s entry to the Nato alliance, which may be approved at an alliance summit in Brussels in July where Greece plans to lift a decade-long veto on the country’s membership.

Jens Stoltenberg, Nato’s secretary-general, welcomed the agreement. “I now call on both countries to finalise the agreement reached by the two leaders. This will set Skopje on its path to Nato membership. And it will help to consolidate peace and stability across the wider western Balkans,” he said.

More
Posted by Yulie Foka-Kavalieraki at 1:30 AM