Eurozone governments have brokered a long-awaited debt relief deal for Greece, pushing back repayment deadlines on almost €100bn of bailout loans as the country prepares to exit its era of financial rescue programmes.

Finance ministers hammered out the final points of an agreement in more than six hours of talks that stretched into the night in Luxembourg on Thursday. The deal was immediately hailed by governments as a “historic” step after eight years in which Greece has undergone three bailout programmes and suffered the worst depression of any European economy in modern times.

“It is an exceptional moment,” Pierre Moscovici, the EU’s economy commissioner, said after the meeting. “The Greek crisis ends here tonight in Luxembourg.”

The agreement means the repayment of €96bn of bailout loans, about 40 per cent of the total Greece needs to repay the eurozone over the coming decades, will be pushed back 10 years. The earliest repayment deadlines shift from 2023 to 2033. 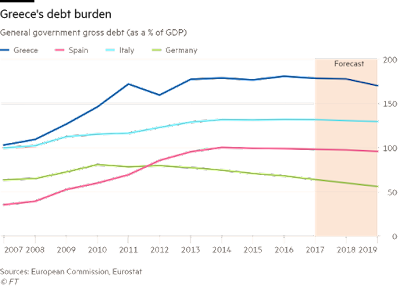 Posted by Aristides N. Hatzis at 8:18 AM