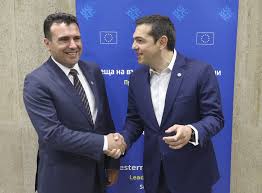 As the world focuses on U.S.-North Korea negotiations, today’s announcement of a resolution to the long-standing disagreement between Greece and Macedonia over the latter’s name is testament to the triumph of patient diplomacy. While successive U.S. administrations have actively supported this effort, the Trump administration deserves kudos for quiet engagement that helped push it over the line.

The name dispute dates to the break-up of Yugoslavia in 1991, when the country declared independence as the Republic of Macedonia. Athens objected to international recognition of the new country’s name, which it shared with a region in northern Greece, given concerns it could imply territorial claims. As a compromise, the country joined the United Nations in 1993 under a provisional name (the Former Yugoslav Republic of Macedonia). Following a 19-month Greek trade embargo, Macedonia amended its constitution and changed its flag in 1995. However, Greece blocked it from joining NATO or beginning accession talks with the European Union (EU) until the name issue was definitively resolved.

After years of failed efforts, the politics were ripe in both countries for a deal. In Macedonia, the lack of progress on Euro-Atlantic integration contributed to democratic backsliding over the last decade. The government of Prime Minister Nikola Gruevski took actions that provoked its southern neighbor. In 2006 it named Skopje airport after Alexander the Great (the ancient Greek king who controlled territory that included the Greek region of Macedonia), and in 2011 it erected a 72-foot statue of him in the capital. Following a two-year political crisis dominated by a corruption scandal and violence in parliament, the election of Prime Minister Zoran Zaev last summer marked the first change of power in 11 years. His center-left government faced a weak economy, tense ethnic relations, and deteriorating political institutions. Motivated to resolve the name issue, he undid the airport and statue irritants as goodwill gestures.