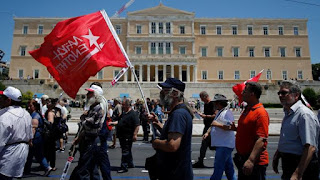 It was 2am on Friday in Luxembourg — and Greece’s finance minister could finally hail the delivery of a debt relief deal to help his country “turn a page” on eight years of bailouts, austerity and unprecedented economic tutelage.

“I think this is the end of the Greek crisis,” said Euclid Tsakalotos after fellow eurozone ministers signed off on the sought-after measures, which had been two years in the making.

The agreement paves the way for Greece to end a series of highly contentious bailouts that took the country to the brink of crashing out of the eurozone and poisoned relations with Germany.

But the stark reality of Greece’s €200bn stockpile of loans borrowed from eurozone governments means it will live with the legacy of the crisis for decades to come.