An agreement on Greek debt that satisfies both sides 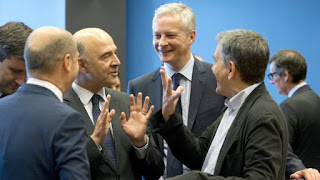 There was an unmistakable note of triumph in the words with which Mário Centeno, the Portuguese head of the eurogroup of eurozone finance ministers, announced the agreement that concludes eight years of emergency bailouts for Greece. “Greece joins Ireland, Spain, Cyprus and my own country Portugal in the ranks of euro area countries that turned around their economies and once again stand on their own feet,” Mr Centeno said.

It is certainly a cleverly crafted deal, and each side — Greece and its eurozone creditors — gets enough from it to hail it as a success. For Germany and its allies, there is no explicit write-off of Greek debt, which should ease domestic political pressure on chancellor Angela Merkel’s government from critics suspicious that Berlin too often picks up the tab for the eurozone.

At the same time, the provision of a €24.1bn cash buffer for Greece after its third bailout officially ends in August removes most doubts that Athens might fall into another sovereign debt crisis over the next two and a half years, or even longer. Moreover, the creditors have extracted a commitment from Greece to run large fiscal surpluses for many years to come — a promise that will ease the concerns of those who always identified fiscal irresponsibility as the root cause of the Greek crisis.