The Far Left and Right Run Riot on Greek Streets 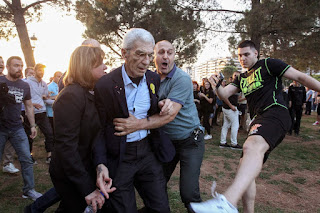 Greece’s long economic crisis may technically be over, as the country is on course to exit its third bailout in August. But the decade-long depression leaves in its wake a society seething with resentment and divided on the causes of the catastrophe. The Greek political system is ill-equipped to deal with this fallout—which includes various shades of political violence.

Earlier this month Mayor Yannis Boutaris of Thessaloniki, Greece’s second-largest city, was attacked and beaten during a ceremony to commemorate the massacre of Pontic Greeks by Turkish forces during World War I. Mr. Boutaris, 75, has drawn the ire of far-right groups for years over his social liberalism and insistent push for better relations with Turkey and the former Yugoslav Republic of Macedonia. Two days after the attack, anarchists stormed Greece’s top administrative court, smashing window panes and tossing paint on the walls. The incidents are symptoms of a wider trend in the country: the inability of the state to defend the rule of law as various groups challenge its monopoly on force.

In the early years of the bailout era, Greece was beset by violent mass demonstrations. Several members of Parliament and other officials were waylaid in public for not standing up to the demands of the country’s creditors. Syriza, at the time a small hard-left opposition party, often rationalized these incidents as the product of the legitimate indignation of the people. In some cases, the party’s local cadres and student members led the way. Meantime, the far-right group Golden Dawn grew more influential and attempted to impose its dominance on the streets, attacking and even killing immigrants and left-wing activists.