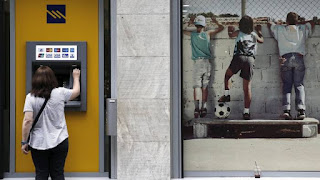 Greece’s four biggest banks would take a €15.5bn hit to their average capital in a future economic downturn, according to the results of the European Central Bank’s stress test of the country’s main lenders.

The ECB’s health check of the Greek banking system is designed to determine if any of the banks need extra equity before the country enters talks on leaving its eight-year bailout programme.

Senior Greek officials said the outcome of the exercise meant there was “no immediate need for a capital increase by any bank”. However, one official said that while the banks were out of immediate danger they needed to clean up their balance sheets and several were likely to raise capital soon — notably Piraeus Bank, which emerged as a laggard in the tests.

“The stress test have gone as well as we could expect,” said one official, adding that they would ease Greece’s return to borrowing on international markets.

More
Posted by Yulie Foka-Kavalieraki at 10:08 AM