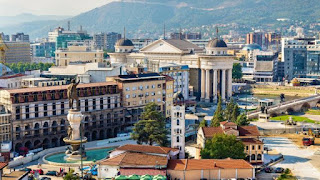 If the definition of progress is that a country no longer names its capital’s airport after a warrior king who died 2,300 years ago in Babylon, then there is surely hope for the Balkans — the source of many a modern European conflict. In February, Macedonia’s reformist leadership reversed the previous government’s bombastic nationalism and changed the name of Alexander the Great airport to Skopje International. The ice began to melt in one of post-Communist Europe’s most vexed disputes.

On the highway into Skopje, capital of the former Yugoslav republic, large green signs tell of more change. The road no longer bears Alexander’s name but is called Friendship Highway. Macedonian leaders consider these relabelling exercises to be not cosmetic but genuine concessions to Greece. For 27 years, Athens has accused its northern neighbour of laying claim to Greece’s territory, cultural heritage and identity by using Macedonia as a name and Alexander as a state symbol.

Negotiations aimed at finding a compromise on Macedonia’s name are approaching a climax. The foreign ministers of Greece and Macedonia have met 20 times. Should a deal be struck, it would send a rare signal to other quarrelling Balkan states and communities — Serbia and Kosovo, for example, or the Muslims, Croats and Serbs of Bosnia and Herzegovina — that even the most painful historical wounds heal with treatment.