Achieving an inclusive and sustainable recovery in Greece

Greece is finally recovering from a deep depression. In 2017 GDP expanded by 1.3%, according to initial estimates, and is projected to accelerate to 2% in 2018 and 2.3% in 2019 (Figure 1). Labour market reforms have improved competitiveness and exports are leading the expansion. Overall the economy is becoming more open. Exports rose from 24% of GDP in 2008 to 34% in 2017. Employment is rising strongly while the external and fiscal imbalances are being addressed. Public finances are outperforming European Stability Mechanism (ESM) Stability Support programme’s targets, helping to restore fiscal credibility. Financial markets are taking notice, with bond spreads falling and agencies upgrading their ratings of Greece’s public debt. 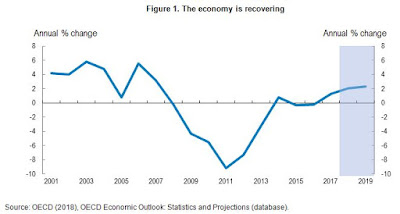 Despite these positive developments, the long crisis has left deep scars in the society that have yet to heal. GDP per capita is still 25% below its pre-crisis level. The public debt is still high. Wages are low. Though poverty has stabilised, it remains near a record high, especially among the young and families.

The OECD’s 2018 Economic Survey of Greece suggests that maintaining the reform momentum and strengthening reform ownership will be essential to sustaining the recovery and moving towards a more inclusive and prosperous society. Keeping the reform momentum is crucial to tackle the three key challenges highlighted in the 2018 Survey: Improving debt sustainability, sustaining job growth and reducing poverty, boosting investment.

Read the OECD 2018 Economic Survey for Greece
Posted by Yulie Foka-Kavalieraki at 10:17 AM