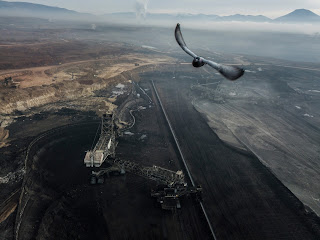 Photographs and research by Anna Pantelia

Mining for lignite - or brown coal - in Greece is a huge industry. Together with Germany and Poland, the country accounts for more than one-third of the world’s coal production. But for residents of villages in the extraction areas of West Macedonia, it has many impacts, from displacement to health problems.

Thick dust suspended in the atmosphere makes it hard to see the sun over Ptolemaida, a city 500 kilometres north-west of Athens in the West Macedonia region, known for its brown coal (lignite) mines and power stations.

Kostas works as a guard for the state-owned Public Power Corporation (PPC), like his father before him. “My father died of cancer when I was 12,” he says. “Four other men from his shift lost their lives from cancer.”