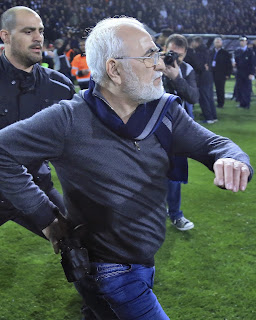 Greece’s Superleague has been suspended indefinitely and the country threatened with a ban from world football as the government scrambled to contain the fallout from the extraordinary scenes on Sunday when the gun‑toting oligarch owner of Paok Salonika stormed on to the pitch in a fit of fury to challenge a goal.

Athens’ leftist-led administration, facing widespread criticism of the lawlessness into which the country’s league has sunk, said all top-flight games would be brought to an immediate halt.

“We have decided to suspend the championship indefinitely,” the deputy sports minister, Giorgos Vassiliadis, said after holding two hours of emergency talks with the prime minister, Alexis Tsipras. “The most important thing is that rules apply to everyone. We are in communication with Uefa and the championship will not resume unless there is a new and clear framework, agreed by all, to move forward with rules and regulations.”

Speaking hours after the announcement of an arrest warrant for Paok’s proprietor, Ivan Savvidis, the politician insisted the government would not renege on its decision whatever the “political cost”. He said: “We are not going back, we will continue the fight for transparency and a better football.”