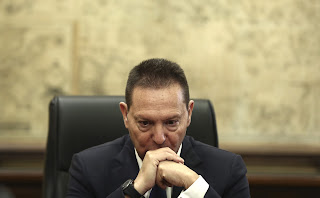 Greek lawmakers begin discussions Wednesday on the alleged role of former senior government officials in a Novartis AG bribery case, which is part of a drug-overpricing scandal that’s estimated to have cost the country about 23 billion euros ($28.7 billion).

The case has snared 10 politicians, including former Finance Minister and current Bank of Greece Governor and European Central Bank Governing Council member Yannis Stournaras. All have denied wrongdoing. The Greek parliamentary hearing comes after another ECB Governing Council member, Ilmars Rimsevics of Latvia, was detained over the weekend by the country’s anti-corruption agency on suspicion of securing bribes. He has denied the charges and refused to step down.

The Novartis case in Greece is part of a global pharmaceuticals industry scandal and investigates the Swiss drug-maker’s part in allegedly inflating drug and vaccine prices. The bribery investigation, which has also drawn in two former prime ministers and a European Union commissioner, is roiling the political landscape in Greece as the country prepares for an exit from its bailout program. The case threatens to deepen the public’s disillusionment with established political parties and bolster groups on the extreme, observers said.