Greek protesters take to streets in battle over Macedonia’s name 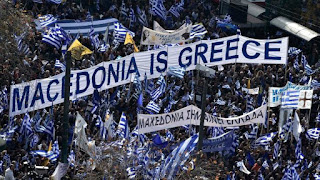 Hundreds of thousands of demonstrators gathered outside the Greek parliament on Sunday to protest against the leftwing Syriza government’s attempt to settle a decades-long dispute with Greece’s northern neighbour over rival claims to the name Macedonia.

Protesters waved Greek flags and shouted “Hands off Macedonia” as the 92-year-old composer Mikis Theodorakis, Greece’s best-known cultural figure, made a rare public appearance to appeal for national unity to counter what he described as a “threat to our territorial integrity”.

“There is one Macedonia and it is, was and always will be Greek,” said the former leftwing activist and culture minister, who has become an outspoken nationalist.

Macedonia and Greece have been at loggerheads for almost 30 years over the name issue, since Macedonia declared independence in 1991 from the collapsing Yugoslav federation. Athens raised objections within weeks, claiming the name implied a territorial claim on Greece’s own region of Macedonia.