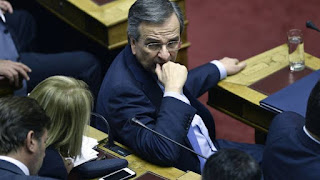 Lawmakers from Greece’s ruling leftwing Syriza party have backed a call by prime minister Alexis Tsipras for a parliamentary probe into allegations that 10 top politicians accepted bribes from the Swiss pharmaceuticals company Novartis.

Two former prime ministers, the central bank governor and a former health minister now serving as the EU’s commissioner for home affairs, were among those named in a report by Greece’s anti-corruption prosecutor on corruption in the state health service.

Six other former ministers and undersecretaries of health are also accused of taking bribes from Novartis between 2001 and 2015 in return for illegally raising drug prices and giving the Swiss company privileged access to the Greek market. All those accused strongly denied wrongdoing.

“Our only aim is to reveal the truth — it is others who resort to “fake news” . . . We have a responsibility to stop the squandering of public money,” Mr Tsipras told Syriza lawmakers on Monday.