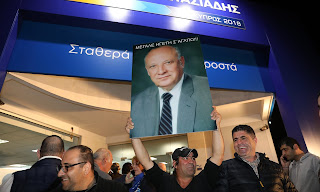 Greek Cypriots have re-elected Nicos Anastasiades as their eighth president in what is seen as a ringing endorsement of his stable leadership over the past five years.

The 71-year-old conservative won a second five-year term on Sunday with 56% of the vote. His opponent, the leftist-backed independent Stavros Malas, took 44%.

There were scenes of jubilation in Nicosia as news of the incumbent’s 12-point lead reached the campaign headquarters of Anastasiades’ Democratic Rally party (Dysi). Supporters poured on to the streets holding Cypriot, Greek and party flags, chanting slogans and honking horns. “Victory is a beautiful thing,” said Christos Papamichael, a Dysi activist.

“The biggest challenge we face is reunifying our country. I will continue to work with the same determination in a bid to achieve our common goal – ending foreign occupation and reunifying our state. There are no winners or losers, just Cyprus.”

Anastasiades had long been the frontrunner of a lacklustre electoral campaign marked by voter abstention.