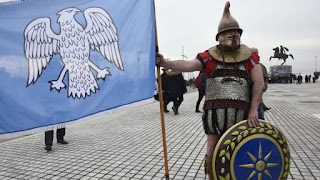 Against the backdrop of a warrior-like statue of Alexander the Great on horseback, retired general Frangoulis Frangos gave a crowd of more than 300,000 in Thessaloniki, the northern Greek capital, the message they had come to hear.

“Macedonia is only Greek and will remain so,” he declared.

Mr Frangos, a burly former army chief of staff, is rallying popular opposition to a new effort by Alexis Tsipras, Greece’s prime minister, to solve one of the country’s most intractable foreign policy disputes: what to call Greece’s northern neighbour, which is officially known as FYROM (Former Yugoslav Republic of Macedonia).

Macedonia and Greece have been at loggerheads for almost 30 years over the name issue, since Macedonia declared independence in 1990 from the collapsing Yugoslav federation. Athens raised objections within weeks, claiming the name implied a territorial claim on Greece’s own region of Macedonia.