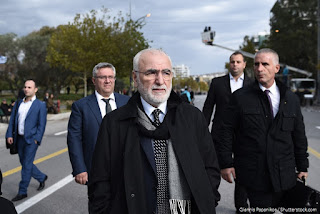 Ivan Ignatyevich Savvidis has played many unusual roles in his life—one of the great tobacco tycoons of Eurasia, a member of Russia’s Duma, a confidante of Vladimir Putin —but it is his latest one that is now sounding off alarm bells throughout Europe. Savvidis is the parvenu of Greece’s oligarchic scene. Since the onset of the economic crisis, he has effectively seized personal ownership over vast sectors of Thessaloniki, Greece’s second city and its maritime gateway to the Balkans. The fire sale of old state assets—an auctioning process ordained by the European Union as part of its enforcement of economic austerity, but which has become overwhelmingly rigged by vested political interests within Greece—has given Savvidis a rare opportunity to invest hundreds of millions of euros into his ancestral homeland. A soccer team, a grand luxury hotel, a tobacco conglomerate, a water-bottling company, a fleet of beach resorts, a television station, a trio of newspapers, great stretches of coastline and blocs of Thessaloniki real estate, the port of Salonika and its industrial warehouses: these are but a few of the holdings that Savvidis has quietly acquired in the last eight years. The buying spree has lately given rise to a strange new coinage across the newspaper headlines and streets of his adopted city: Ivanaptiksi, “prosperity emanating from Ivan.”

This slow-motion conquest, taking place hundreds of kilometers from Athens in a city that makes few international headlines, has now begun to raise serious questions. How has a man worth $760 million on paper invested close to half of that amount in Greece in less than a decade? Allegations now being openly raised by the European press, along with concerns publicly voiced by the American ambassador in Athens, suggest that Ivan Savvidis is not what he appears to be: Masquerading as the financial savior of Thessaloniki, the theory runs, he is in fact a conduit of Putinist interests in the Aegean.

Seen in this light, virtually all of Savvidis’s business deals and public undertakings in Greece seem to serve Moscow’s agenda. His dealings with the center-right New Democracy party—marrying off his niece to its general secretary, pitting its various clans against one another, peeling off the loyalties of its elected constituents through purported bribery all across northern Greece—appear an effort to sow division within the party most bent on Greece’s continued membership in the European Union. His purchase of Thessaloniki’s port seems a move to stymy NATO’s naval access to the interior of the Balkans, a region at the convergence of Russian and American spheres of influence. The millions of euros Savvidis has donated to the monasteries of Mount Athos for the construction of new churches act simultaneously as a Russian investment of soft power in a no-man’s land of international authority and financial transparency.