One of Western Europe’s most dramatic bond-convergence trades this decade -- Greece over Germany -- looks like it will reward investors yet again in 2018.

London hedge fund Algebris Investments is among those betting economic momentum will take the country’s borrowing costs even closer to Germany’s after the Mediterranean country’s 10-year yield spread narrowed by about 44 basis points this month alone. Algebris says it may shrink by as much as 75 basis points. 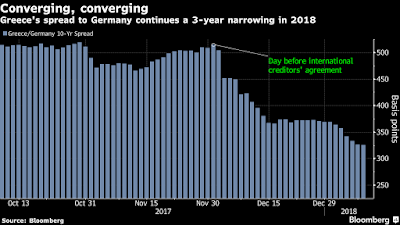 Greece’s economic recovery and speculation the country may exit its bailout program this year are coinciding with strong risk appetite, driving down borrowing costs.

“Greece has been one of our strongest views in 2017 and 2016,” said Alberto Gallo, a portfolio manager and head of macro strategies at Algebris Investments. The firm has cashed out on some of its positions even though it continues to favor the trade, he said.