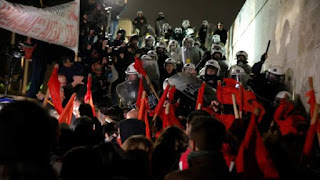 Greek lawmakers on Monday approved an omnibus package of labour, energy and fiscal reforms needed to wrap up the penultimate review of its €86bn bailout, as police clashed with leftwing demonstrators outside the parliament building.

The protests were prompted by a controversial labour reform that requires unions to win the support of 50 per cent of their membership before calling a strike. Public transport and government offices shut down on Monday as workers stayed away in protest against the move.

Protestors also objected to the launch of electronic auctions to dispose of properties that banks have already foreclosed on, as well as looming cuts in social benefits to be decided later this year.