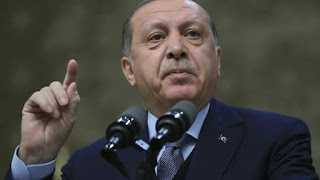 During a two-day visit Mr Erdogan’s comments on minority rights, Cyprus and the treaty that defines the Greek-Turkish relationship visibly shocked Prokopis Pavlopoulos, his Greek counterpart, and put Alexis Tsipras, the prime minister, on the defensive at a joint news conference.

Mr Erdogan publicly rehearsed a series of bilateral grievances that at their most extreme have brought the two Nato allies and Aegean neighbours to the brink of war.

Athens had billed Mr Erdogan’s visit as an opportunity to consolidate bilateral ties and perhaps make progress towards reducing the continued flow of refugees and migrants from Turkey to the eastern Greek islands. While refugee arrivals have shrunk since last year’s deal between Ankara and the EU, Greek officials are concerned about an rise in numbers over the past six months.