Is Greece Ready for a Ronald Reagan or Margaret Thatcher? 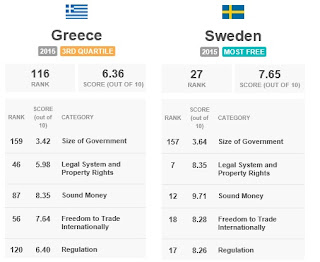 I’ve written that it’s theoretically possible for Greece to pay its debts and restore prosperity.

After all, it’s simply a matter of obeying fiscal policy’s Golden Rule and reforming a suffocating tax system.

But I’ve always figured none of that will happen because Greek voters would never vote for a government that favors Reagan-style or Thatcher-style economic reforms.

Simply stated, there are too may Greek people living off the state. But that’s just part of the problem. An even bigger obstacle to reform is that the people have decided that it’s morally acceptable to mooch off the government.

As a result, I’ve assumed that Greece has passed a tipping point because the moral foundation of Greek society has been corroded by dependency. And it’s very difficult to put that toothpaste back in the tube.