Greece Just Witnessed Something It Hasn’t Seen Since 2006

Greece’s economy expanded for a third straight quarter for the first time in more than a decade, providing a foundation for the country’s attempts to exit its bailout program next year.

Gross domestic product grew 0.3 percent in the three months through September after expanding a revised 0.8 percent in the previous quarter, the Hellenic Statistical Authority said in a statement on Monday. From a year earlier, GDP grew 1.3 percent. 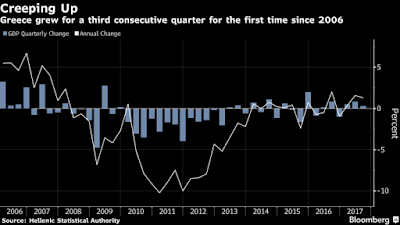 Greece’s government and representatives of the country’s creditor institutions on Saturday agreed on a set of economic overhauls the country must undertake in exchange for fresh loans. The payout, supplemented by more bond market forays next year, will help the government build a cash buffer as it seeks to prepare for its bailout exit when the current program expires in August 2018.