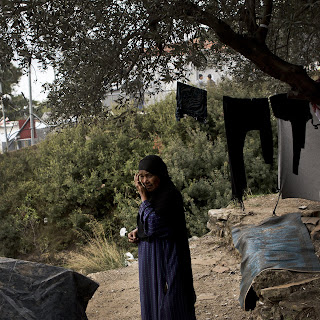 Three months ago, Shehab Kabalan, a 20-year-old from Syria, traveled in a small boat from Turkey to Greece in the hope of receiving asylum in Europe and starting a new life.

Instead he is trapped on the island of Samos, living in a flimsy tent among dozens of other migrants and refugees, prevented from traveling to the mainland and now bracing for a hard winter.

Earlier this month, he slashed his wrists. A doctor patched him up and sent him back to the tent camp. “I felt desperate,” Mr. Kabalan said. “We are dying slowly here.”

Greece’s migration crisis has faded somewhat from view since a March 2016 pact between the European Union and Turkey stanched the enormous flows of migrants crossing the Aegean Sea.

But a surge in recent months has created abysmal conditions here, sparking accusations that EU and Greek authorities are leaving thousands of migrants exposed to disease, cold weather and violence as a deterrent to other would-be refugees. Earlier this fall, 200 people were crossing to the Greek islands of Samos, Chios, Lesbos, Leros and Kos daily, a fourfold increase over the spring. Arrivals have declined in recent weeks but remain high despite the worsening weather.

“The EU-Turkey deal incorporates strong elements of deterrence,” said Gabriel Sakellaridis, head of Greek operations for Amnesty International. “No political considerations should tramp upon human rights like that.”