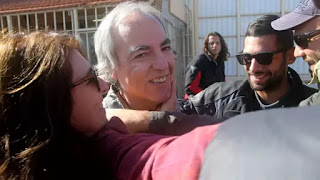 A convicted terrorist from Greece’s extremist November 17 group released from an Athens prison on Thursday on a two-day furlough prompted a storm of protest from politicians and civil society against the leftwing Syriza government.

Dimitris Koufodinas’s request for parole was approved by the Korydallos prison council, which specified he must report to his local police station twice a day.

A leading member of N17, Koufodinas is serving a series of life sentences for killing 11 prominent Greeks and foreign officials between 1976 and 2000.

The council had rejected several of his previous requests, which were made under a regulation that allows short furloughs for prisoners serving life sentences once they have spent eight years in jail. Mr Koufodinas was sentenced in 2003 alongside 14 other members of N17.