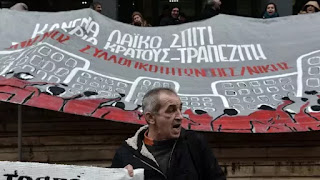 Greece’s notaries have begun a two-month strike aimed at blocking the leftwing Syriza government’s plan to launch electronic auctions of repossessed properties this month, as agreed in the country’s current bailout deal with the EU.

The notaries resorted to industrial action after their requests for protection from attacks by leftwing extremists protesting against foreclosures were ignored by the authorities, according to Giorgos Roskas, president of their union.

The walkout raises concerns that Greek banks will miss this year’s target for reducing non-performing loans, with potential knock-on effects for the outcome of stress tests that the European Central Bank will conduct in Greece early in 2018.

News of the strike prompted Mario Draghi, president of the European Central Bank, to call for a swift solution to the dispute during Monday’s meeting of euro area finance ministers. Mr Draghi also stressed the importance of tackling the issue of non-performing loans, according to a Greek official.