Greece prepares to do away with compulsory sharia in Western Thrace 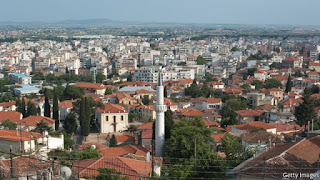 As part of a passionate campaign to solve an apparently non-existent problem, American state legislatures have been presented, over the past decade, with at least 120 bills that sought to outlaw the practice of sharia, the Islamic legal system, and 15 of them have been enacted. With or without these laws, America’s attachment to its own constitution and judicial and legal system seems pretty robust.

Things are not quite so clear-cut on the other side of the Atlantic. Thanks to a vagary of history, there is one little patch of the European Union where sharia has hitherto held sway, not as a self-imposed code of behaviour but as a system under which Muslim citizens have been pressured to regulate their business, especially involving inheritance. That region is Western Thrace, a part of Greece adjoining the land border with Turkey. Alexis Tsipras, Greece’s leftist prime minister, is about to introduce legislation that will change that odd state of affairs.

The situation has its roots in regional history. Back in 1923, when Greece and Turkey were negotiating a massive, compulsory swap of religious minorities, it was agreed that two communities would have an exceptional right to remain where they lived: the Greek community of Istanbul (defined rather narrowly) and the Muslims of Western Thrace, a majority of whom spoke Turkish. Each community numbered around 110,000. After the vicissitudes of the past century, the Greeks of Istanbul have dwindled to a few thousand, while the Muslim population in Thrace has remained roughly level. (It would be much higher had there not been widespread emigration.)