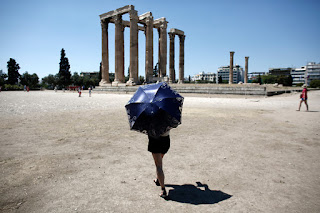 If there was ever a textbook example of how not to handle a sovereign debt crisis, it was Greece. Nearly a decade since Athens first asked for help from its euro zone partners and the International Monetary Fund, the Greek economy is still struggling to recover. Even after a steep restructuring, sovereign debt remains unsustainable. If Greece is not to be crippled by its debt load, European governments will have to accept further debt-reducing measures, on top of the maturity extensions and the cut in interest rates they have already agreed to.

So it's no surprise that one of the key debates on the future of the euro zone relates to how sovereign debt restructuring should be made easier. There is little doubt that forcing losses on creditors at an earlier stage, as some propose, would increase the chance that a program of financial assistance is successful. However, the euro zone should be wary of automatic triggers; they risk bringing on the very crisis they are designed to avert.

The debate on the future of debt restructuring in the euro zone largely involves two positions. The first, which is widely shared in Germany, sees an orderly debt restructuring mechanism as an essential next step for the currency union. When a country applies for financial help from the European Stability Mechanism (ESM), creditors should face some form of debt restructuring immediately. This would ensure a better distribution of risks between debt-holders and the ESM. The threat of a haircut will make investors more discerning in their lending, contributing to fiscal discipline within the euro zone.