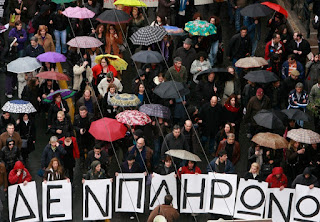 Anticipating the Spanish government’s decision to suspend Catalan autonomy, the Catalan government proceeded today to unilaterally proclaim independence. At about the same time, the Spanish Senate voted to suspend Catalan autonomy, following which Spanish prime minister Mariano Rajoy deposed Catalan premier Carles Puigdemont and other Catalan high officials, and called for elections in Catalonia to be held in December. Jointly, these actions are escalating the Catalan crisis. How are things likely to develop from now on?

Every political crisis is unique, yet sometimes analogies are useful—especially when crises are unfolding and the flow of information can be extremely confusing. Seen from this perspective, the Greek crisis of 2015 offers some useful analogies.

In 2010 Greece found itself unable to refinance its debt. Faced with the prospect of default, it accepted a massive bailout from its eurozone partners along with the IMF, in exchange for which it agreed to implement a large set of fiscally restrictive policies (“austerity”) and structural reforms. In turn, these policies led to an acute economic recession and a parallel political crisis which went through various phases and resulted in a massive political realignment. This process culminated in the January 2015 elections, which produced a victory of an anti-austerity party, Syriza.