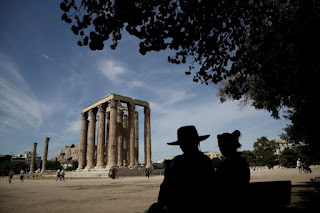 The government’s target was for a primary budget surplus - which excludes debt-servicing costs - of 4.556 billion euros for the January-to-September period, meaning the surplus missed the target by 54 million euros.

The central government surplus excludes the budgets of social security organizations and local administration. It is different from the figure monitored by Greece’s EU/IMF lenders but indicates the state of the country’s finances.