Greece Faces a Rerun of Its Refugee Winter of Discontent 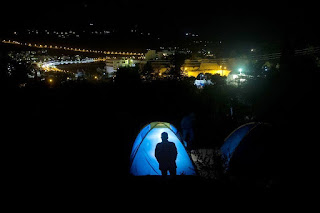 The shelter offered to Amira since she got to Europe amounts to a plastic sheet she has slept under for the past ten days. The Syrian mother of three was taken to Vathy, a camp on the Greek island of Samos where nearly 3,000 people are spilling out of a facility built for 700. She struggles to explain to her children, who lost their father in the war, why they must sleep rough being bitten by insects.

“I had protected them until now from the war, but I can no longer protect them here,” said the 32-year-old, who has no diapers for her five-month-old daughter. “It makes me want to scream, but I can’t, not in front of the children.”

October downpours have signaled the coming of winter on Greece’s Aegean Islands and with it the very real prospect of another fiasco to match the frozen misery of last year when six people died. While conditions have improved for asylum seekers on the mainland, the deal between the European Union and Turkey that staunched the flow of refugees and migrants in March 2016 aimed to deter future arrivals by confining them to “hot spot” camps on five Greek islands.