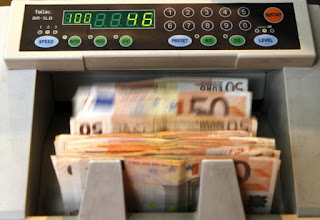 Those cheering the looming departure of Wolfgang Schaeuble from the German Ministry of Finance should hold the champagne. His successor may not be as ornery, but southern Europeans -- and above all Greeks -- shouldn't expect any better treatment.

Schaeuble has held a wide range of positions since he was first elected to the German parliament in 1972; he's been interior minister, chief of staff to the chancellor and the leader of the Christian Democratic Union, the party now headed by Chancellor Angela Merkel; he nearly became president at one point and chancellor at another. Only one of his post-World War II predecessors at the Ministry of Finance has served longer than his eight years, and not by much. But Schaeuble has always served his party in whatever position it could offer, and he'll still be a formidable figure as speaker of the parliament, formally the second most senior office-holder in Germany after the president, just ahead of the chancellor.

Schaeuble's protestant philosophy of political service is important for the understanding of his tenure as finance minister. Of course, it took personal conviction to steer his unwavering course of austerity, balanced budgets and respect for rules. Schaeuble was trained at the University of Freiburg, where ordoliberalism was developed in the 1930s through 1950s. This theory married a liberal, pro-market approach with a strong state, whose role is to maintain a high level of social security. Ordoliberalism has faded somewhat since the 1970s, but it still influences much of German economic thinking, and Schaeuble was close to its origins in his formative years. As finance minister late in his life, he tended to lean toward the "ordo" part. He once confessed to his brother: "The older I get and the more I see as finance minister, the more skeptical I get about capitalism."