The eurozone may be back on its feet. But is Greece? 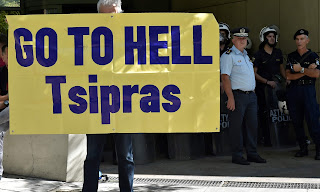 Is the eurozone on the mend? Jean-Claude Juncker certainly thinks so. The EU president was upbeat in Brussels last week as he gave his annual state-of-the-union address, proclaiming that “the wind is back in Europe’s sails”.

Juncker’s optimism appeared to match the view from Greece, the currency bloc’s problem child. In Athens only the previous week, the visiting French president, Emmanuel Macron, had been even more enthusiastic, declaring against the backdrop of the Acropolis that Greece’s prolonged crisis was over, and that therefore Europe’s was too.

But if progress on Greece’s privatisation programme is anything to go by, the eurozone’s most troubled economy is still in the foothills of recovery. Despite signs of resurgence – at 0.7%, Greece recorded two consecutive quarters of growth this year for the first time since 2006, and made a successful test return to the markets – foreign sell-offs have been plagued by red tape and political resistance.