Moscovici: Greek bailout was a ‘scandal’ for democratic procedures 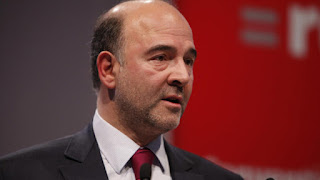 The Eurogroup’s handling of Greece’s bailout programme was a scandal in terms of democratic processes, Economic Affairs Commissioner Pierre Moscovici insisted in an interview with Corriere della Sera.

After eight years of crisis and tough austerity-driven policies, the French Commissioner admitted that the Eurogroup’s decisions “behind closed doors” on the Greek bailout was a scandal in terms of democratic processes.

In June, the much-awaited second assessment of Greece’s third bailout was successfully concluded. On Tuesday (5 September), Moscovici will meet Greek Finance Minister Euclid Tsakalotos in order to start the negotiations on the third evaluation.

“It is a scandal in terms of democratic processes, not because the decisions were scandalous, but because by deciding in this way the fate of a nation, imposing detailed decisions on pensions, the labor market,” Moscovici told Corriere della Sera.

More
Posted by Yulie Foka-Kavalieraki at 11:13 AM