Forget the Parthenon: how austerity is laying waste to Athens' modern heritage 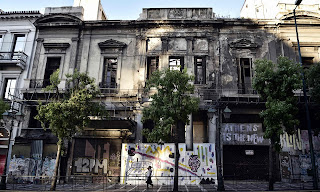 Not that long ago I received a questionnaire through my door. How had the 1930s Bauhaus building in which I live survived the rigours of time? Who had designed it? Who was its first owner? And, the form went on, what were my memories of it?

Circulated far and wide across Athens, the questionnaire and its findings are part of a vast inventory of 19th- and early 20th-century buildings that now stand at the heart of a burgeoning cultural heritage crisis in Greece. At least 10,600 buildings are on the database and it is growing by the day.

Against a backdrop of economic recession – the price of three gargantuan bailouts to keep the debt-stricken country afloat – home maintenance has become a luxury few can afford. With bank loans frozen and cuts and tax increases straining budgets, many of the buildings have been allowed to fall into disrepair, or have been pulled down altogether.

“In the present climate, people just don’t have the money to restore them,” says Irini Gratsia, co-founder of Monumenta, the association of archaeologists and architects that is collating the database. “There is a great danger that many will be demolished not because their owners want new builds, but because they want to avoid property taxes announced since the crisis began.”

More
Posted by Yulie Foka-Kavalieraki at 9:35 AM