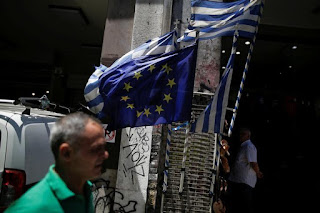 European Union states decided on Monday to close disciplinary procedures against Greece over its excessive deficit after improvements in Greece’s fiscal position, confirming the country’s recovery is on the right track.

The move, although largely symbolic, sends a new signal that Greece’s public finances are again under control, facilitating the country’s plans to tap markets after a successful issue of bonds in July which ended a three-year exile.

EU fiscal rules oblige member states to keep their budget deficits below 3 percent of their economic output or face sanctions that could entail hefty fines, although so far no country has received a financial penalty.