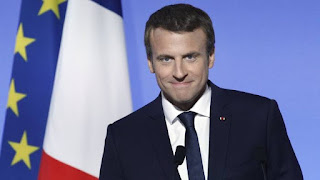 Emmanuel Macron will make the case for an overhaul of the eurozone during a two-day state visit to Greece designed to mark the member of the single-currency union’s relative return to normality.

The French president and his wife are flying to Athens with about 40 French executives on Thursday to emphasise the need for more financial solidarity with weaker members of the eurozone, in the form of investment and a common budget to help prevent new existential crises in the bloc, Elysée aides said.

The leader is pushing for the EU to adopt tighter labour rules, more protective trade tools and more stimulus, in exchange for more budget discipline at home and deregulation in the French jobs market — a bargain that Germany is showing signs it might consider.

Mr Macron has said he would like each country’s contribution to the future eurozone budget to amount to “several” gross domestic product percentage points.

More
Posted by Yulie Foka-Kavalieraki at 7:29 AM