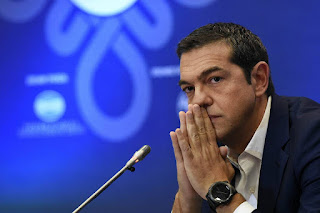 Among the casualties of Greece’s extended economic crisis has been the country’s establishment left. The near-decimation of the center-left Pasok party has meant that in recent years the political space between the governing Syriza party on the far left and the parties of the center-right has had little effective representation. But now, after many false starts, an effort is under way to re-energize the center-left with a new political party, and Prime Minister Alexis Tsipras is concerned.

Pasok governed Greece for 21 of the 30 years between 1981 and 2011, never dropping below 38% in parliamentary elections. Under the weight of its own mishandling of the country’s fiscal collapse, however, the party’s support nosedived to 12% from 44% in two-and-half years. By the January 2015 election, its support plummeted below 5%. Meanwhile, Syriza won 35% of the vote in 2015, up from less than 5% in the October 2009 election.

Several initiatives since then to regroup and unify the ranks between Syriza and the center-right New Democracy party achieved little. The legacy of fragmentation and conflicting personal strategies that long bedevilled the political center seemed impossible to overcome.

Meanwhile, Mr. Tsipras’s abandonment of his radical agenda and his embrace, however half-hearted, of the reform-and-austerity policies of his predecessors, made him a plausible candidate to take up the leadership of Greek social democracy.