Greece in Crisis: The Cultural Politics of Austerity 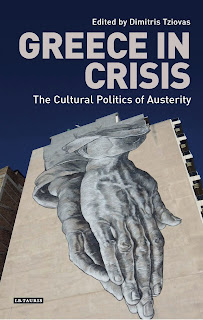 Since 2010 Greece has been experiencing the longest period of austerity and economic downturn in its recent history. Economic changes may be happening more rapidly and be more visible than the cultural effects of the crisis which are likely to take longer to become visible, however in recent times, both at home and abroad, the Greek arts scene has been discussed mainly in terms of the crisis. While there is no shortage of accounts of Greece’s economic crisis by financial and political analysts, the cultural impact of austerity has yet to be properly addressed. This book analyses hitherto uncharted cultural aspects of the Greek economic crisis by exploring the connections between austerity and culture. Covering literary, artistic and visual representations of the crisis, it includes a range of chapters focusing on different aspects of the cultural politics of austerity such as the uses of history and archaeology, the brain drain and the Greek diaspora, Greek cinema, museums, music festivals, street art and literature as well as manifestations of how the crisis has led Greeks to rethink or question cultural discourses and conceptions of identity.

Posted by Yulie Foka-Kavalieraki at 6:48 PM