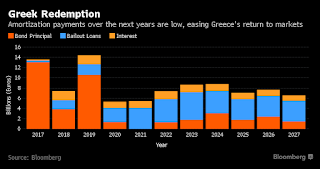 Greece raised 3 billion euros ($3.5 billion) in its first tapping of the bond market since 2014, with investors piling in on expectations the worst may be over for what was once the epicenter of Europe’s debt crisis.

Yield-hungry investors welcomed the new Greek paper, which carried a 4.625 percent yield. The sale by the sub-investment-grade rated country drew 6.5 billion euros in more than 200 offers, said a Greek government official, requesting anonymity because the information is not public. Greece’s last five-year bonds in April 2014 priced at 4.95 percent. Greece sold the new bonds along with a tender offer for the notes due 2019.

With the sale, the government of Prime Minister Alexis Tsipras is seeking to chalk out a path for an exit from the current bailout program, which ends in August 2018, while also capping the country’s financing needs in 2019 -- expected to be about 19 billion euros. Greece decided to test the markets after it failed to convince creditors to immediately reduce its debt burden and was left out of the European Central Bank’s bond-purchase program.

The outcome “was better than we expected,” Greek Finance Minister Euclid Tsakalotos said in comments broadcast live on state-run ERT TV. “This is not the end. There will be a second and a third” bond sale to ensure the country exits its bailout program in August 2018, he said.

“Tsipras left behind ‘collision economics’ a long time ago, and has apparently decided that the best strategy for re-election in 2019 is to exit the bailout program,” Nicholas Wall, manager at Old Mutual Global Investors, said in e-mailed comments.

Posted by Yulie Foka-Kavalieraki at 6:10 PM