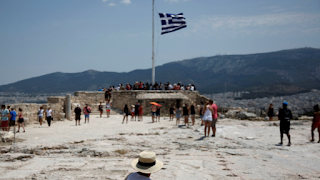 The Greek government has hired six banks to manage its return to the international bond markets after three years.

Goldman Sachs, Citi, Deutsche Bank, HSBC, BNP Paribas, and Bank of America Merrill Lynch will manage the deal to issue a five-year bond maturing in 2022 – Greece’s first since 2014. The new debt is due to launch tomorrow.

Greece’s left-wing Syriza government has eyed a return to the debt markets to underscore its economic rehabilitation after it was bought to the brink of a eurozone exit two years ago. The government has managed to secure its latest tranche of bailout cash and is looking to slowly build up its cash buffers ahead of the end of its current rescue programme in August 2018.

On Friday, S&P ratings upgraded its outlook on Greek government debt from stable to “positive” on the back of hopes the country will receive further debt relief from its EU creditors.