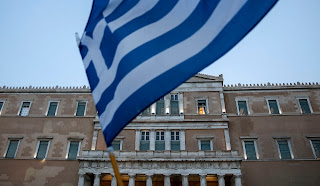 The International Monetary Fund agreed to a new conditional bailout for Greece, ending two years of speculation on whether it would join in another rescue and giving the seal of approval demanded by many of the country’s euro-area creditors.

The Washington-based fund said Thursday its executive board approved “in principle” a new loan worth as much as $1.8 billion. The disbursement of funds is contingent on euro-zone countries providing debt relief to Greece.

“As we have said many times, even with full program implementation, Greece will not be able to restore debt sustainability and needs further debt relief from its European partners,” IMF Managing Director Christine Lagarde said in a statement. “A debt strategy anchored in more realistic assumptions needs to be agreed. I expect a plan to restore debt sustainability to be agreed soon between Greece and its European partners.”

IMF officials estimate that, even if Greece carries out promised reforms, the nation’s debt will reach about 150 percent of gross domestic product by 2030, and become “explosive” beyond that point. European creditors could bring the debt under control by extending grace periods, lengthening the maturity of the debt or deferring interest payments, the IMF said in a report accompanying the announcement.