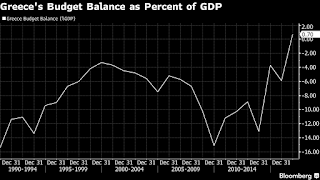 Five years after the sovereign debt crisis nearly tore the euro area apart, the currency bloc’s biggest problem child appears on the road to recovery as the region continues to tick off boxes underscoring its revival.

Greece sold 3 billion euros ($3.5 billion) of bonds this week for the first time since 2014, when the prospect of Alexis Tsipras’s election catapulted borrowing costs to unsustainable levels. The country’s return from the wilderness comes as a new French president has raised expectations about deeper economic integration following successive defeats of europhobic parties.

While there are still uncertainties clouding the euro area’s outlook, Greece’s rebound draws a line under a seven-year crisis, when the fight to preserve the currency union had become a daily routine.

“The euro zone’s recovery is real and political risk has receded,” said Manolis Galenianos, a professor of economics at the Royal Holloway, University of London. “This is not a facade.”

Posted by Yulie Foka-Kavalieraki at 8:59 AM