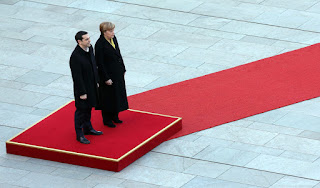 For days, the Greek leader has been working the phones, trying to secure the best possible terms for his country as it enters the last mile of its seemingly endless cycle of bailouts. So far, his efforts have won him more mockery than respect — especially in Germany.

“He keeps calling the whole time, and the chancellor says again and again, ‘Alexis, this issue is for the finance ministers,’” German Finance Minister Wolfgang Schäuble told an audience here on Tuesday, referring to the Greek prime minister’s attempts to win over Angela Merkel to his cause.

Eurozone finance ministers are set to decide at a meeting in Luxembourg on Thursday whether to release a more than €7 billion tranche of aid to Greece. No one doubts Athens will get the money. Schäuble all but committed to it on Tuesday. But Tsipras wants something even more precious: debt relief.