What Britain’s European Union negotiators can learn from the Greeks 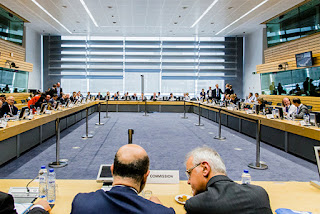 On 24th April 2015, the Greek finance minister, Yanis Varoufakis, attended a meeting of his Eurozone counterparts in the Latvian capital, Riga. Believing the gathering to be largely ceremonial, a sop to the Latvian government which held the rotating presidency of the European Union at the time, Varoufakis was expecting a short session on uncontroversial matters. Instead, the EU’s big hitters—in particular the Eurogroup’s Dutch president Jeroen Dijsselbloem and the German finance minister Wolfgang Schäuble—ambushed him. They threatened him with “plan B,” the vague term used to refer to Greece’s exit from the euro.

Journalists covering the meeting reported that Varoufakis, a radical, leather-jacketed game-theory specialist turned politician, had lost his temper. They claimed that other finance ministers had called him all manner of names, from “gambler” and “amateur” to “time-waster.” There was even talk of a scuffle, something unheard of at these usually soporifically dull meetings. As if to confirm that there was no smoke without fire, Varoufakis had declined the invitation to attend the Eurogroup dinner, preferring to enjoy beer and sausages with his Greek entourage. Stories of his growing isolation from the rest of the Eurozone tribe spread across the media.

A month later, in a long interview with the New York Times, Varoufakis dropped a bomb. All the allegations about name-calling in Riga were false, he said. The meeting had remained perfectly civil—and he could prove this because he had recorded it on his mobile phone. Though he said he could not release the transcript because of confidentiality, his message to the media—and those who had confected the story—was clear: tell the truth, or I will prove you wrong.

With that kind of material in his back pocket, and with a fondness for provocation and controversy, it was only a matter of time before Varoufakis—who was removed from his post in July 2015, after just six months—spilled the beans. The result is Adults in the Room—a whistle-blowing memoir that doubles as a penetrating analysis of the eurozone crisis, one caused in Varoufakis’s view by the stubbornness and ideological dogmatism of what he calls Europe’s “deep establishment.” As Britain prepares to enter exit negotiations with the EU, many will turn to this book for insights. Varoufakis thinks he can help—he wrote an open letter to Theresa May in the Evening Standard in which he urged her to “listen and learn from our Greek tragedy.”

Posted by Yulie Foka-Kavalieraki at 12:16 PM