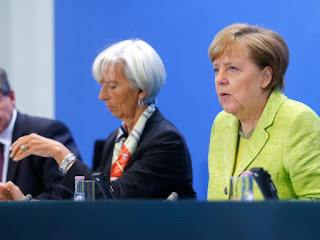 Greece’s economic problems are far from solved, but the International Monetary Fund (IMF) deserves part of the credit for the glimmers of progress on official debt relief in the Eurogroup announcement on June 15. The IMF is expected to issue its “approval in principle” for Greek policy commitments under the European Stability Mechanism (ESM) program, but it will not contribute money until it gets more comfort on debt relief from European governments and institutions. On balance, this makes the IMF a force for good in Greece and in Europe. The Fund’s hard line may be an effort to compensate for past missteps; now it is doing the right thing. It should remain engaged in Europe, and the United States should support its engagement as an independent source of policy expertise and funding.

Europe wants the IMF involved in Greece primarily for political reasons. Its presence can validate the policy and financing package, and commit both sides to perform. The Fund’s reputational capital is pledged to the notion that Greece will recover if the government and its euro area creditors do as they say they will. The IMF has not lent to Greece since 2015. It would be a small part of the financing if it got back in. Paradoxically, the IMF has become more influential as its financial contribution to Greece has diminished. This is an achievement to build on in Europe and beyond.