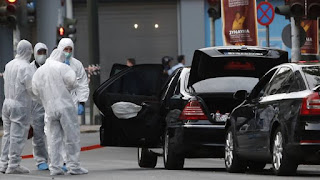 From his hospital bed, with the unruffled calm of the central banker he once was, Lucas Papademos describes the moment that a booby-trapped package exploded in his lap.

“It resembled a box containing some CDs tightly wrapped in plastic as if by a machine,” recalls the former Greek prime minister, who opened the package while being driven home from his office in central Athens. “I tried to tear the plastic — then the box exploded.”

The attack on May 25 shocked Greece’s political and business elite.

Mr Papademos, a former European Central Bank vice-president, led a national unity government in Greece that in 2012 carried out the largest sovereign debt restructuring in history. It was the first time that a Greek official involved with handling the country’s seven-year economic crisis had been targeted, raising worries about a possible campaign of “revenge” attacks by radical anarchists linked to anti-austerity protests.