Only debt relief will end the Greek crisis 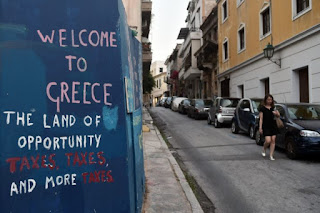 As Greece heads into another meeting of eurozone finance ministers, it finds itself in a painfully familiar position: in desperate need of more bailout funding and a dose of clarity about its future.

But the country isn’t doomed to be the eurozone’s wounded animal forever. If the bloc can agree to give its weakest member a chance of turning itself around, Athens has the means to lift itself — and the rest of the Continent — out of an excruciating cycle.

Eurozone finance ministers are likely to agree that Greece should receive more than €7 billion in fresh loans, but domestic political concerns and all-around fatigue mean Thursday’s Eurogroup meeting is unlikely to be a watershed moment.

Luckily, there is one thing on which everyone can agree. Greece will only shed its pariah status — and free its lenders to end their laborious monitoring of its economy — if it can successfully conclude its third bailout program next summer.

More
Posted by Yulie Foka-Kavalieraki at 11:24 AM