Greek trash collectors back to work after 2-week protest 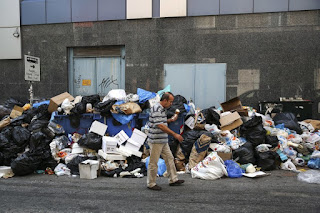 Greek municipal garbage collectors on Thursday decided to return to work after nearly two weeks of protests that left mounds of uncollected refuse in the streets amid a heatwave.

The decision came two days after unionists rejected a compromise proposed by Prime Minister Alexis Tsipras that would see workers’ contracts renewed for several months until full-time hirings are arranged.

More
Posted by Yulie Foka-Kavalieraki at 11:21 AM